Two more Omicron COVID strains have been detected in the U.S. Most health experts and professionals now deem these strains more transmissible than the prevalent ‘Stealth Omicron’.

Even though the majority of the population has been vaccinated, there’s been an alarming uptick in new COVID-19 cases across the country recently.

The U.S. Centers for Disease Control (CDC) now reports that the BA.4 variant has been detected in the following states:

The CDC also reports that the BA.5 variant has also been detected in the following states:

How effective are COVID-19 vaccines against the new variants?

Rodney Russell, a professor of virology and immunology at Memorial University of Newfoundland, says the vaccinated have more protection against the worst effects.

“They’re not keeping you from getting infected very well. But the fact that your body saw the vaccine before you got infected meant that your infection wasn’t going to be as bad as it would have been if you hadn’t been vaccinated,” he said.

However, individuals infected with COVID-19 before the emergence of Omicron are unlikely immune to the emerging BA.4 and BA.5 variants due to continuing mutation of the virus.

Studies about the BA.4 & BA.5 variants

According to Alex Sigal, professor at the Africa Health Research Institute, a wave of BA.4 and BA.5 cases are to be expected. The new variants have greater transmissibility and capacity to resist immunity.

However, the good news so far is that the new variants don’t appear to lead to hospitalization or a severe infection.

Sigal and his colleagues compared blood samples from people who were vaccinated with either Pfizer or Johnson & Johnson.

The study showed that those who had been vaccinated but were previously infected with the virus experienced a milder infection.

The findings of the study astonished Sigal. He hadn’t expected BA.4 and BA.5 to do so well against immunity, primarily since the variants differ only in two ways from the original Omicron.

The symptoms of the new variants appear to be very similar to Omicron. Common symptoms include:

* Cough, runny nose, and fatigue were reported as the most common symptoms for those vaccinated.

“I haven’t seen early symptoms of respiratory distress,” said Sigal, referring to the critical COVID-specific symptom that makes the disease dangerous. “Becoming infected with the virus is never good news, but the risks of contracting a serious infection are currently low.”

He also went on to say that there is solid evidence that the virus has become milder with time:

“It no longer infects the lower respiratory tract where permanent damage can happen and dangerous low blood oxygen saturations can be triggered. So far, the latest COVID variants reside in the upper respiratory tract, where they’re unlikely to cause serious illness.”

What you should know about the Omicron variants

In April, the World Health Organization (WHO) announced that two sub-variants of the highly infectious Omicron strain had emerged.

When new variants are detected, experts immediately examine the mutations that have happened to see if they make the virus less likely to be identified by the immune system. They also investigate whether or not the variants are more likely to cause serious disease.

“Immune evasion occurs when the human immune system can no longer detect the virus effectively,” said Dr. Robert Lahita, head of the Institute for Autoimmune and Rheumatic Disease at Saint Joseph Health.

“We started to see this immune escape with Omicron BA.2, resulting in people who are fully vaccinated getting infected.”

He added that changes in the virus’ mutation to dodge human immune response are expected. “It can either lead to a less severe respiratory disease, or it could be the exact opposite.”

The BA.4 and BA.5 sub-variants of COVID-19 exhibit significant changes in the spike protein that distinguishes them from BA. 2 or other previous variants.

The Omicron strain variants, BA.4 and BA.5, possess new characteristics that allow the virus to elude the patient’s immune system, even in individuals who’ve received a full vaccination.

While the U.S. is on high alert for these new variants, scientists say they aren’t a significant cause for concern at this time.
What they do urge is that you should continue to be cautious even if you’re fully vaccinated. Practice safety precautions and get tested if you, or someone you’ve recently been in contact with, start to develop symptoms similar to the virus. 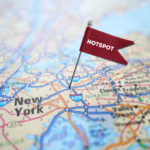 New York A COVID-19 Hotspot – Should We Be Worried? Prev post
The Most Contagious COVID Strain Yet: BA.2.12.1 Cases In NY Rise Next post